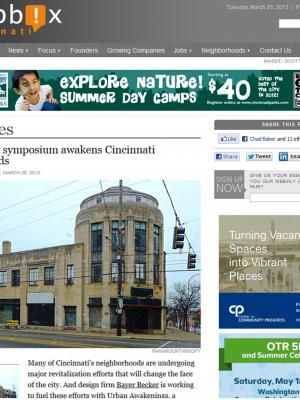 Many of Cincinnati’s neighborhoods are undergoing major revitalization efforts that will change the face of the city. And design firm Bayer Becker is working to fuel these efforts with Urban Awakenings, a four-part series that focuses on four neighborhoods—Walnut Hills, Northside, Over-the-Rhine and East Price Hill—and the changes that are being made there.

“This is a broader opportunity and the first of its kind,” says Mike Dooley, associate at Bayer Becker. “We haven’t covered all bases with the series and there is room to expand.” Urban Awakenings is in its first year, but if the series is well-received, it could grow beyond the planned four events.

The series was an idea from Bayer Becker’s strategic planning team to grow the different areas of the firm’s business. It also supports the firm’s short-term visions of its strategic business plan, says Tim Bayer, vice president and CFO of Bayer Becker.

The neighborhoods of Walnut Hills, Northside, OTR and East Price Hill were chosen because of the mix of geographic areas that represent different rejuvenation efforts.

“We brainstormed where things were happening right now, and what was next for neighborhoods like OTR,” says Dooley. “We realized some people knew about those communities, and we want to generate more interest in them.”

But developers and architects aren’t the only ones who are making big changes in Cincinnati’s neighborhoods.

Awakening Walnut Hills
The first Urban Awakenings event was held on Friday, and it featured a presentation by Walnut Hills Redevelopment Foundation’s Executive Director Kevin Wright. He spoke about the efforts WHRF is doing to brighten up Walnut Hills, and future opportunities for the neighborhood.

When Wright started working for WHRF in 2011, no one on the board of directors knew the nonprofit’s mission statement. It was rewritten, and now presents a comprehensive approach to community development that focuses on real estate, economic development, safety, transportation, design, civic engagement and events and marketing and promotions.

The focus area of Walnut Hills is in the center of the neighborhood at Peebles Corner, which was second in business districts in Cincinnati in the 1950s. WHRF is trying to rejuvenate the area with positive ownership and façade improvements.

“When I took the job, I thought the east end of Walnut Hills would be developed and the west end would remain the same, but the opposite has happened,” says Wright.

Walnut Hills boasts condos along Park Avenue, but it also has the potential for market-rate apartments for those who work in Uptown but who can’t afford to live in other places. One of the selling points of the neighborhood is that it’s within five minutes of everything, says Wright.

Two of the neighborhood’s current projects include the Rhodes buildings and Firehouse Row. WHRF used Walnut Hills TIF money to acquire the buildings, and they’re now working on plans for the developments.

The Rhodes project includes four historic buildings at Kemper and McMillan that are in the pre-development stage. It’s an $8 million project—WHRF used $1.2 million in TIF money to stabilize the buildings and received $1.8 million in historic tax credits from the state. The redevelopment will yield 7,000 square feet of retail space and 30-40 market-rate units; WHRF is working with the Model Group on the project.

Firehouse Row includes Firehouse #16—the oldest standing firehouse in the city—and the Hamilton House. The project will include rehabilitating the two buildings, building townhomes on the vacant land around them and creating a mixed-use structure and a permanent park in the business district. Human Nature, the landscape design firm that worked on Washington Park, is also designing the Walnut Hills park.

On the eastern end of Peebles Corner, the same developer owns 10-15 storefronts. Those spaces could be ready to fill by the end of the year, says Wright.

Recently, WHRF helped facilitate the transfer of ownership of the Brewhouse. A local brother and sister team purchased the restaurant, and they’ve brightened up the exterior of the building and created a new craft beer menu and updated the restaurant’s food offerings.

This past fall, Walnut Hills hosted a street food festival. “One of my friends came up to me and said ‘If you had told me a year ago that I would be on Gilbert with my 2-year-old having a good time, I wouldn’t have believed you,’” says Wright.

Those are the kinds of changes WHRF wants to see in the neighborhood.

Walnut Hills’ future
Even though there have been lots of revitalization efforts in Walnut Hills, there is still more to do.

“There are still opportunities for development in the neighborhood,” says Wright. “The southwestern quadrant of Walnut Hills has great views of the city, and a few clusters of historic buildings that are overgrown or abandoned, and an underused park.”

The signature building of the neighborhood—the old Paramount movie theater—has retail space on the first floor with office space above it. There's also an old bath house in the central business district that Wright would love to see turned into a bar someday.

One of Wright’s ideas for the future revolves around the existing fiber that was put up 15-20 years ago on the power poles in the central business district. There were plans for Internet cafés and dreams of Walnut Hills becoming a “digital village,” but they never took form. WHRF is currently working with Cincinnati Bell to figure out the potential for fiber in the neighborhood and bringing in startups and tech companies.

And even though the face of Walnut Hills will see many changes in the coming years, it will still remain a corridor to downtown Cincinnati and Uptown. “Location doesn’t change, no matter what else does,” says Wright.